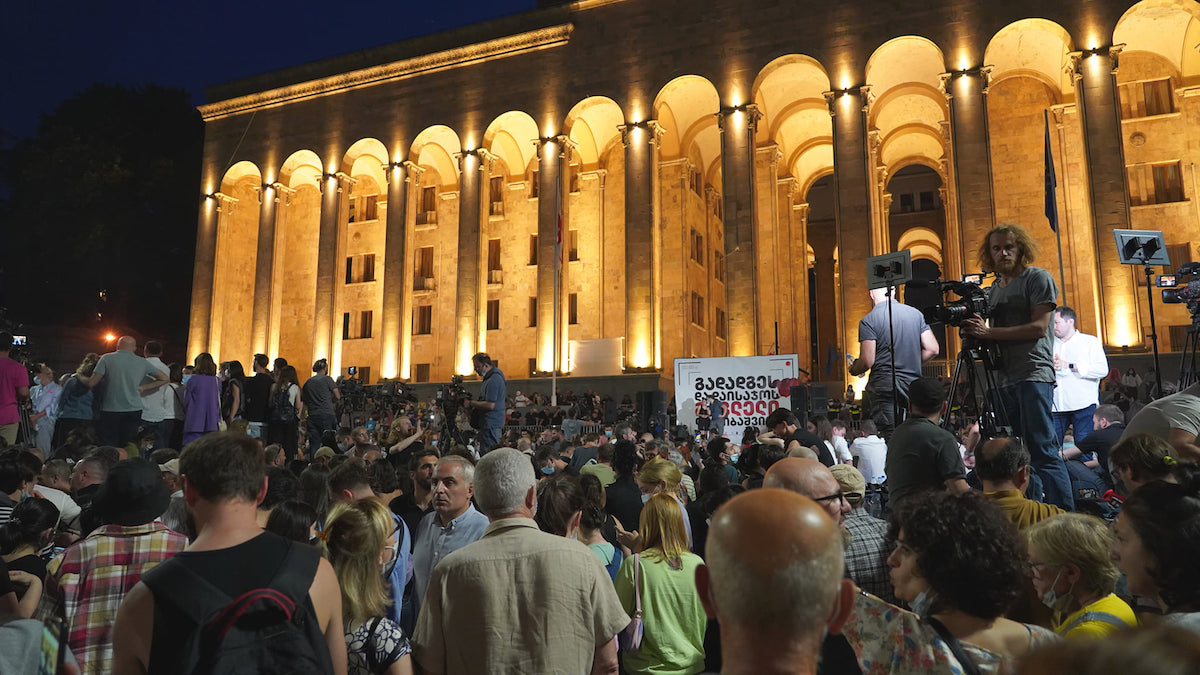 The International Human Rights Organization, Human Rights Watch, released a 2021 report, according to which, amid the political crisis, Georgia has experienced a setback in a number of human rights areas. .

According to the report, the inadequacy of justice for crimes committed by law enforcement officials remains an unresolved problem in Georgia. Other areas of concern include brutal police interference with freedom of assembly, attacks on journalists and the growing threat to media pluralism, institutionalization of children in orphanages, violence against the LGBT + community and unsafe working conditions.

The report also notes that Georgia has not fulfilled the conditions for a justice reform in order to receive 75 million euros in aid from the European Union.

The report notes the political crisis that followed the 2020 parliamentary elections and the boycott of parliamentary seats by opposition parties.

Observers from the International Organization for Security and Co-operation in Europe (OSCE) assessed the election as competitive and “technically well administered”, but noted that “the allegations of electoral pressure, voter corruption and unequal conditions hampered the process ”.

“After the second round of elections at the end of October, observers noted a clear imbalance of resources and the disproportionate advantage of being in power added to the competitive advantage of the ruling party and created unequal electoral conditions,” the report said. .

Human Rights Watch reports that on the eve of the elections on October 1, police arrested former Georgian President Mikheil Saakashvili, who had returned to the country after eight years in exile.

Human Rights Watch notes that the impunity of law enforcement officials for the crimes they committed has remained an unresolved issue in Georgia. According to the report, police restricted the right to freedom of assembly by not allowing protesters to pitch tents in front of parliament. In addition to this, on February 23, 2021, police raided the United National Movement office and arrested party leader Nika Melia.

According to the Georgian Association of Young Lawyers (GYLA), the police used disproportionate force in the form of tear gas and could not explain the reasons why the computer equipment was removed from the UNM headquarters . “Melia was charged with inciting violence during a protest in Tbilisi in 2019 and refused to pay the increased bail amount, he was also charged with removing his electronic monitoring bracelet during a gathering in November 2020, “the report said.

The report also mentions the changes made by Parliament to the Code of Administrative Offenses. As the organization notes, after the changes, fines doubled and tripled (to around $ 1,300), the administrative detention period was extended from 7 to 15 days, and judges were denied the right to apply a relatively light penalty for repeated offenses.

“The information was allegedly obtained through illegal surveillance. The documents also included personal conversations with journalists, opposition politicians, officials and foreign diplomats. The prosecutor’s office has opened an investigation into the disclosed documents ”.

The HRW report says that in 2021, journalists and other members of the media were subjected to extensive intimidation and attacks. In February, police arrested three people who assaulted journalist Vakho Sanay, host of the private Formula TV channel:

“According to Sanay, the attackers recognized him and assaulted him. In August, the court found the attackers guilty and punished them with a penalty equal to their pre-trial detention ”.

The report also examines the events of July 5, 2021 and highlights that at least 53 media professionals, including journalists and cameramen, were verbally and physically assaulted by violent groups opposing the LGBT pride march. The attackers also reportedly smashed and destroyed material belonging to media representatives. Several journalists were injured and had to be hospitalized.

A few days later, the cameraman of the Pirveli TV company, Alexander Lashkarava, was found dead in his apartment. He suffered facial fractures, concussions and bruises from the beatings and underwent surgery. The day after his death, before the cause of death could be fully established, the authorities, on the basis of an “interim expert report”, designated a drug overdose as the probable cause of death. “At the time of writing this report, the expert’s final opinion has not been published,” the report states.

HRW also reports that on July 22, Culture Minister Tea Tsulukiani, in response to uncomfortable questions, grabbed a microphone from a correspondent on the main opposition television station and never returned it.

“Instead of protecting the safety and freedom of assembly, the authorities blamed the organizers and participants of the Pride. Prime Minister Irakli Garibashvili said it was “inappropriate” to organize a demonstration in a public place which could provoke “civil clashes”. The Interior Ministry also warned organizers that such a procession should not be held in a public place. According to many media, there were small groups of police on site, but they could not effectively prevent incidents of violence, ”the statement said.

According to the organization, for legal gender recognition in Georgia, transgender people must submit a document confirming gender reassignment surgery, and this requirement creates serious obstacles for transgender people in their daily lives, leads to their marginalization and increases the risk of unemployment. and poverty.

Rights of the child

The report examines the situation around the Ninotsminda orphanage school. The organization notes that the Georgian Ombudsman was twice refused permission to carry out surveillance there. In this regard, the United Nations Committee on the Rights of the Child has adopted an interim emergency measure, urging the authorities to ensure immediate monitoring of the situation around the Ninotsminda boarding school.

The organization draws attention to the plight of children in the context of the pandemic and cites a UNICEF report that around 50,000 children in Georgia were left without access to education after switching to education from a distance :

“Many students face difficulties in distance education, especially in poor mountainous areas, due to poor internet coverage, lack of appropriate electronic devices in poor families and the inexperience of teachers in online learning ”.

HRW notes that fundamental changes in labor law entered into force on January 1, 2021. However, despite the reforms, ensuring adequate working conditions remains a challenge. According to the organization, social protection is minimal and unions lack the legal mechanisms that would allow them to effectively negotiate systemic change. In addition, the effectiveness of the “labor inspectorate” is limited by a lack of resources:

“Safety at work also remains a challenge. According to the Labor Inspectorate, from January to September, 20 people died and 189 were injured at work ”.

The report says that the European Union, the United States and other Western partners have been helping Georgia overcome the political crisis for the past year.

“In March, the Georgia-EU Association Council assessed the implementation of the Association Agreement. The European Union (EU) called on Georgia to strengthen compliance with anti-discrimination legislation, protect minorities and ensure gender equality. He also called on Georgia to continue creating an effective labor inspectorate “in order to further improve working conditions”. In July, in the framework of the EU-Georgia human rights dialogue, the EU and Georgia condemned the violent attacks which led to the cancellation of the March for Dignity, and Georgia committed to investigating these attacks, ”the report said.